Indie game enthusiasts had a bit of a melancholy Summer last year, due to the conspicuous absence and apparent death of Microsoft’s traditional Summer of Arcade indie showcase, which had been offered for many years on Xbox 360. Fear not however, as Summer of Arcade will live on within the company’s next-gen Xbox One console!… Just, with a bit of a makeover. 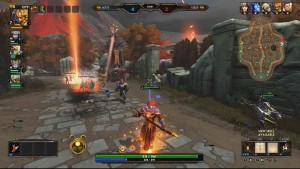 Seeing as the ‘Xbox Live Arcade’ branding used on Xbox 360 has been dropped for the dedicated digital game selection of Xbox One, which is given equal billing to digital copies of retail offerings on the Xbox One Games Store, the promotion is being re-named. It will now be called ‘Summer Spotlight’ on Xbox One, which Microsoft confirmed while discussing the [email protected] indie game development program at their E3 Daily Show. Not all of the details for this year’s debuting ‘Summer Spotlight’ are being revealed yet, though Xbox spokesperson, Larry “Major Nelson” Hryb did tease some of the indie games that would be spotlighted this year, namely Smite, Toy Soldiers: War Chest, and the reboot of King’s Quest, even if any others are still a secret.

It’s not confirmed yet, though it’s likely that Sony will be answering the so-called ‘Xbox Summer Spotlight’ with their own usual indie game spotlighting promotion, PLAY, which provides pre-order discounts and rewards for playing a quartet of Summer indie game releases from the PlayStation Store. Sony previously had a Spring Fever promotion during March and April this year as well, which provided early discounts for pre-ordered indie games, similar to PLAY, only encompassing eight games in that case, not four. Nintendo has also joined the Summer indie spotlighting initiative in their own way for E3 to boot, with nine indie games set to come to the Wii U eShop being playable for any Wii U owner from home, with no need to go to E3 proper. Not only that, but those who sample the demos during the week-long ‘[email protected]’ promotion on Wii U can enjoy temporary discounts on the final game releases, when they fully launch on the Wii U eShop.

Keep showcasing Eggplante for all news and updates on Xbox Summer Showcase, and other key Xbox incentives.