At first glance, Lovely Planet looks like some sort of bad LSD trip, one that happens to take the form of a bizarre, almost dream-like first-person shooter. You could be forgiven for dismissing it as some Japanese college student screwing around with a starter engine, due to its unassuming, and yet mind-melting presentation, which seems to incorporate Japanese lettering and surrealism as part of its nonsense design.

Surprisingly though, the game is not in fact the work of a Japanese developer, kana be damned, but of QUICKTEQUILA, a very mysterious little indie outfit with a surprising lack of online information, even on their own website. After doing some digging, I learned that QUICKTEQUILA is actually based in Delhi, India, and much of Lovely Planet was apparently put together by just one man, with independent composer, Callum Bowen handling the offbeat, but catchy music.

Lovely Planet has also been available in the PC space on Steam and GOG for about a year now, where it’s currently priced at $6.49 CDN. It’s pretty evident that the game was originally designed to be played on PC as well, given that its wild, twitch-based presentation seems to be built around mouse movement. The very simplistic surrealist polygon artwork also feels like something that could very easily be tossed together by a fledgling computer programmer on something like the Unity Engine. To put it bluntly, Lovely Planet isn’t much to look at, as much as it’s desperately trying to stand apart from the pack of indie shooters. That said however, it can be good silly fun, if you don’t mind the handful of frustrating elements.

With Lovely Planet soon making its console debut on Wii U, and also apparently planned for Xbox One at some point according to several sources (though strangely, not PS4 for now, despite the console’s huge love of attracting indie devs), does the gameplay translate to Nintendo’s quirky console? Mostly, yes.

Like I said, Lovely Planet is clearly designed to be played on a PC, and some of its gameplay elements don’t wholly translate to movement on the Wii U Gamepad, which was the only control option available for the demo. It’s all functional, even if this Wii U build is clearly a secondary port.

The Lovely Planet demo consisted of a handful of the earlier levels, along with a brief jump to some more advanced levels further ahead, which took me about ten minutes total or so to play through. Stages can be completed very quickly once you master them, sometimes in less than ten seconds with the shorter stages, though they also rely a bit on trial-and-error, since non-sensical pixel bullets and red ball hazards often hit you from unseen angles, and send you back to the start of the stage. There’s no checkpoints in Lovely Planet either, but given the short nature of the game’s stages, this is fair enough.

Nothing in Lovely Planet has any context. You often have to discover as you play that any red balls in the scenery will kill you, or that you have a limited time to run through a shield-like dome that appears before it obliterates you. Part of the challenge is learning to respond to all of the insane, abstract imagery that’s being thrown at you, though that simply takes some practice.

Fortunately, once you get a handle on the weirdness, there’s a primal gamers’ satisfaction involved in skillfully running and shooting your way through Lovely Planet’s insanity. It can be frustrating to be constantly killed by bullets and hazards that you continuously can’t see and react to in time, but despite that, Lovely Planet often proves to be oddly addictive. Its difficulty curve is pretty smart, at least in the demo build, and the fact that you have unlimited ammo in your strange blaster-like fun wand… thing, and that it fires very quickly and responsively, helps a lot when dealing with the rather devious placement of enemies. You’re really not meant to carefully hide and take cover in Lovely Planet. You’re meant to run and leap and dodge with surgical precision, never stopping to take a breath. The only way to avoid some enemy bullets is to either jump or weave around them, as retreating will just wind up with you being hit, and kicked back to the start of the stage. 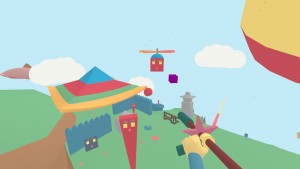 But, this is all stuff that players of the original PC release would already know. As for how Lovely Planet seems to be turning out on Wii U, well, as I said, there seems to be no major problems. The game looks and sounds the same on Wii U as it does on PC, basic presentation and all. Lovely Planet’s Wii U demo also sported off-TV play, with a simultaneous image of gameplay running identically on the Wii U Gamepad Screen as I played. What’s really important though is the framerate. which, thankfully, still runs at a perfect 60fps at all times on Nintendo’s console. This is crucial, given the speedy, twitchy nature of Lovely Planet’s gameplay, and I’m glad that the Wii U version boasts the same brisk, steady 60fps clip as its PC predecessor.

The Wii U Gamepad controls are also pretty comfortable and mostly reliable, with the control stick sensitivity feeling pretty well-tuned and just right. The control sticks obviously don’t give you the same level of precision as a mouse would in the PC version, and it does take away from some of the snappy satisfaction that Lovely Planet offers on PC, but the controls are still well-translated to the Wii U Gamepad, even if jumping with the ZL Trigger is a bit weird, and takes a bit of getting used to. I do understand that it makes ergonomic sense though, given how relentlessly you have to shoot with the ZR Trigger in this game. If you need to, you can also press the X Button as sort of a ‘Suicide Button’ as well, in case you end up trapped or otherwise screwed. It’s appreciated, though it is sometimes a reminder that Lovely Planet’s environmental physics can be suspect if you go off the beaten path.

All in all, Lovely Planet’s colourful craziness seems to be a good fit for the Wii U’s ecosystem, and it gives Wii U owners a simpler, but more primally satisfying first-person shooter option to help compensate for just about any other recent FPS offering skipping Wii U in favour of PS4 and Xbox One. The game is largely the same experience on Wii U as it is on PC, just with the addition of off-TV play to compensate for the loss of mouse control from the PC version. Lovely Planet may still feel most at home on PC, but it looks to be translated pretty well to Nintendo’s console.

It has some quirks and annoyances, but if you’re eager for a new first-person shooter to play on your Wii U, Lovely Planet may be worth considering when it releases on the Wii U eShop. You might want to play it with a tinfoil hat though!