Better Call Saul continues to move towards Season Three’s climax on a very strong note this week, as Jimmy starts going to desperate lengths to get a payday, while Chuck and Howard’s professional relationship quickly falls apart. “Fall” had many of the characters hitting huge new roadblocks in their lives, while Jimmy seemingly builds himself up on his latest morally questionable actions, and by the time it finishes, the stage is set for plenty of intense drama to unfold in next week’s season finale.

With Jimmy still desperate to attain funds, he begins the episode by re-discovering an infamous face from his professional past; Sandpiper Crossing. After learning that Davis & Main still has yet to prompt a settlement for the senior citizens at the retirement home, Jimmy decides to circumvent the system by manipulating events so that the home’s representative forces a settlement, which in turn grants Jimmy a bunch of money as well. This was brilliantly illustrated and developed throughout the episode, as Jimmy’s actions seem innocent at first, but become more and more devious and destructive as the episode goes on.

While Jimmy does things like give the kindly old lady in charge of negotiating some really nice shoes and (store-bought) cookies, his manipulations soon extend to obliterating her social circle and having her cheat at bingo. Jimmy still gets the result he wants, as Sandpiper’s forced settlement gives him enough of a payout to keep his practice going during his suspension, but at what cost? While the other characters seem to be on a downward turn, things now seem to be looking up for Jimmy regardless, and it’s interesting to see how Jimmy’s achievements don’t carry as much meaning when no one else is properly able to celebrate with him.

Probably the most exciting development in this penultimate episode for Season Three however was seeing Chuck declare war on Howard, after Howard realizes that he needs to distance HHM from an increasingly unstable Chuck. Chuck’s recovery has certainly been very speedy, as he now seems pretty much completely un-bothered by electricity now, which is a bit questionable, since you’d think it would take him a whole lot longer to get entrenched back with HHM and in top lawyer form, but that’s ultimately a minor nitpick, especially since we do see Chuck still having to ‘detox’ at his home at the very least. Howard making an enemy of Chuck is something that will no doubt lead to big consequences in the season finale next week most importantly, if not the very likely Season Four to come as well! We’ll have to see if Howard distrusting Chuck proves to be a costly mistake, as Chuck announces that he’s suing HHM! 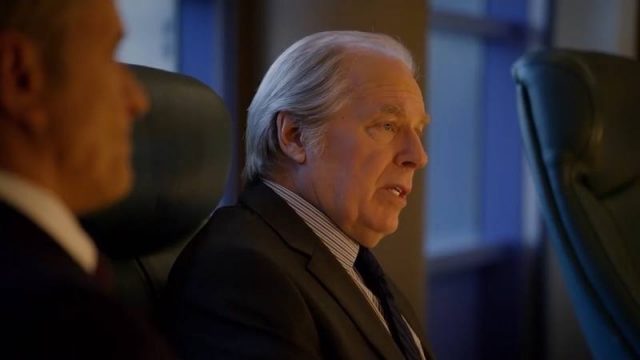 Another shocking development finally had Kim’s exhaustion coming to a pretty big head as well, as Kim finally takes on an additional client beyond Mesa Verde. While Kim appears to work well with the man struggling with oil drilling rights disputes, she finds herself making a gradual array of increasingly sloppy mistakes as the episode goes on. Like Jimmy and Howard, Kim saw a fantastic and shocking payoff towards the end of the episode, as a seemingly routine drive suddenly smash cuts into Kim crashing her car into a rock on the side of the road! This was very unexpected, and nicely ended the episode on an especially uncertain note for Kim, as she seems to be facing the straw that broke the camel’s back with her workload. How will this affect her own professional prospects for the end of the season?

This just leaves the criminal storylines between Mike and Nacho, even if these largely went where viewers would expect. This duo of storylines are no doubt saving their big punches for next week’s season finale, as Mike starts laundering his money through Lydia and Fring, while Nacho sees Fring provoke Hector into taking some of his altered medication, no doubt setting the stage for Hector’s imminent stroke. With Mike’s finances and Nacho’s fate seemingly in Fring’s hands, the events of Breaking Bad are especially starting to spill out with their origins in the back half of Better Call Saul’s third season, and this is proving to be very rewarding for fans of AMC’s original hit meth drama.

“Fall” lived up to its name by having most of its characters aptly ‘fall’ into hard-hitting tragedy, even as Jimmy and Fring at least appear to be thriving through their amoral actions. Jimmy nonetheless saw some small consequences for his treachery with the Sandpiper settlement, as he failed to stop an exhausted Kim from hitting the road and crashing her car, but beyond that, he seems to be profiting from his continued steps into becoming the Saul Goodman that Breaking Bad fans know and love. Better Call Saul is shining brighter than ever now, moving towards a very promising season finale next week, which will no doubt leave many of this show’s characters in especially difficult positions. I remain surprised that AMC still hasn’t yet officially renewed Better Call Saul for a fourth season, even though it’s all but guaranteed at this point, though it could be chalked up to the network trying to work out exactly how much longer the show should go on for. Like I said though, even if our days with Jimmy McGill are rapidly becoming numbered, I’m nonetheless very excited to see how everyone’s fates come together, before Walter White comes along to ruin their lives even further.