Preacher returned to a heavy focus on humour this week, yet not at the expense of the stakes that are continuing to build towards the season finale in a couple of weeks. “The Tom/Brady” also notably shifted focus back to the supporting cast for the most part to boot, with Jesse spending the entire episode in the custody of the Allfather, while Tulip and Cassidy were left to have pretty much all of the fun. This was perfectly fine though, since there were plenty of entertaining story elements to enjoy, even with Jesse spending almost the entire episode stuck in a Genesis-sucking machine.

Despite Jesse seemingly successfully shooting the Allfather, plus taking out a bunch of his guards in a pretty enjoyable fight sequence to kick things off, it turns out that the Allfather is in fact so fat that even a direct gunshot to the chest can’t kill him. Turns out, Jesse really should have aimed for the head. This miscalculation leads to Jesse getting captured, and Herr Starr having to pretend to go along with this, while also trying to coach Jesse into escaping and finishing the job. There is a bit of an intriguing hint that Starr may have betrayed Jesse all along at first, but unfortunately, the show drops it pretty quickly. Even worse is that this episode doesn’t do a great job of justifying why Starr can’t just kill the Allfather himself. He says something about feeling it would be professionally irresponsible, but this is a pretty bullshit reason, especially for the guy who kicked off the current season of Preacher by shooting up an ashram! 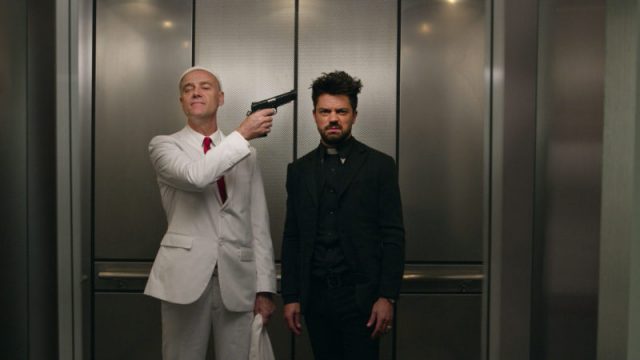 On the bright side however, we did finally get an explanation on Genesis and exactly how it works. Much like in the source comics, Genesis is the product of an unholy mating between an angel and a demon, and the only vessel it can thrive in is someone who perfectly balances good and evil in equal measure, like Jesse. This is why everyone else that Genesis attempts to inhabit ends up exploding in a mess of gore. This messy situation is demonstrated once again with Humperdoo, who fails to take in Genesis after the Grail attempts to embed it within him, but then, another Humperdoo enters?! This was actually one of the most interesting twists of the episode; The Grail is apparently capable of cloning Humperdoo to infinite capacities, allowing them to tweak the genetic modification using celebrity DNA. Once they get the right combination, the titular, “Tom/Brady”, a Humperdoo clone uses Genesis successfully, before the Grail’s people kill him, and lead the real Humperdoo into the room. We don’t see what happens yet, but a Genesis-powered Humperdoo is definitely a massive issue, one that’s sure to be a big obstacle next week!

Outside of the Grail, Tulip, Featherstone and Jody largely stole the episode and ran with it, since their trip to Japan definitely lived up to its absurd expectations. Tulip and Featherstone incessantly getting on each other’s nerves is funny enough, but the two having to host a fake sexual harassment seminar with Jody was the perfect kind of gut-busting absurdity that represents Preacher at its best! The subsequent heist was also quite funny and well-executed, allowing Tulip and Featherstone to annoy each other more, before they successfully walk out with the deposit of souls that they were after. After Tulip and Featherstone seemingly make peace over a job well done however, Featherstone swipes the souls for herself, leading to Tulip pointing her out to a woman who appears to be a cop, Sydney. Oh yeah, remember Sydney? 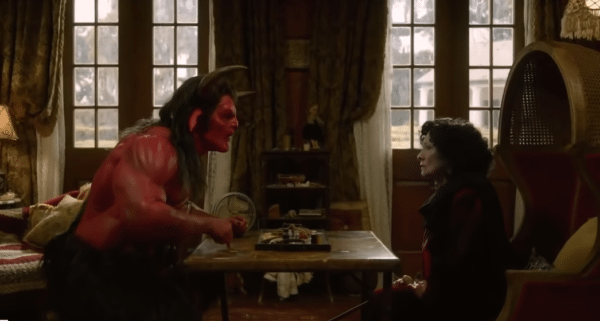 That’s right, Satan himself is beginning to stick his nose into Tulip’s business! This was actually an inspired development that finally outlined Gran’ma’s mysterious connection to the forces of Hell, whom she seems to quite literally have on speed dial. Turns out, Gran’ma made a deal with the Devil, which is the source of her supernatural powers. The deal allows Gran’ma to absorb souls and maintain perpetual youth and power (well, relatively), but once Gran’ma dies, she’s definitely going straight to Hell for eternity. This finally seems to give us an avenue to take Gran’ma down, since she’s always seemed to win whenever any issue comes up in Angelville, but if her fate in the source comics is any indication especially, Gran’ma’s days are probably numbered, now that the season only has two episodes left. Considering that Sydney just grabbed Featherstone instead of Tulip, after Gran’ma talked Satan into hunting Tulip down for her, I can’t help but wonder if this mix-up will somehow end up being Gran’ma’s downfall, which would be a very rich, satisfying irony, considering that Gran’ma was the one who resurrected Tulip at the start of the season.

As for Cassidy, he’s still largely disconnected from the rest of the season’s events, though the show is moving closer to bringing him back into the main fold, since Hoover continues to doggedly pursue him. Hoover does end up quickly being captured by Les Enfants du Sang however, and after Herr Starr simply tells the cult to kill him, being humourously apathetic towards the fate of one of his right-hand agents, it’s instead suggested that Hoover be turned into a vampire. This is an enormous deviation from the source comics, wherein Cassidy and Eccarius are the only two vampires in the printed panels, but Hoover being turned in the TV adaptation does conveniently allow Cassidy to discover that Eccarius is murdering his followers. This doesn’t happen until the episode is winding down, but the true fallout to this discovery is bound to be a great hook for next week’s episode, especially since Hoover manages to escape, conveniently allowing him to run back to the Grail, even in his newly vampiric state. 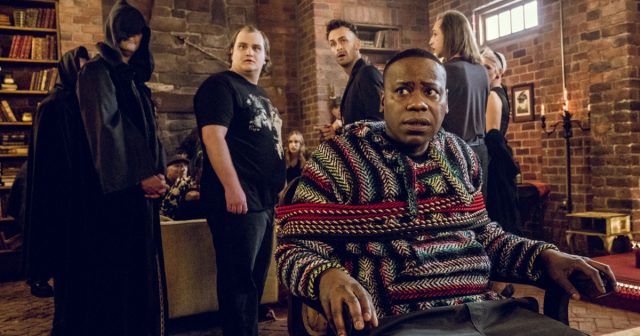 “The Tom/Brady” continues to have Preacher nicely ratcheting up the stakes in the home stretch of its current season. It felt like this week’s focus on humour was the right move too, considering that there’s bound to be plenty of drama in the season’s final two remaining episodes. It was also great that we finally got some crucial exposition this week to boot, regarding both Genesis, and the true source of Gran’ma’s powers. The show seems to have written itself into a bit of a corner with Jesse’s capture, since it really had to strain to justify why Herr Starr needs Jesse to kill the Allfather at this point, when Starr could easily do it himself and just claim Jesse did it, particularly when the Grail agents take their eyes off of Starr several times over the course of the episode, but whatever. I imagine that it won’t be too long before Starr’s plan comes to fruition anyway. I can safely say that I never expected Humperdoo to be as much of an obstacle as he now seems to be though!