As of late, gamers (and the medium itself) have been abuzz about cyberpunk. Yes, most of this is due to the hype surrounding Cyberpunk 2077, and the horrid launch that followed, but it’s not all exclusive to CD Projekt RED’s technical disaster. No, there are other games that have tried to take advantage of the futuristic, dystopian and technology gone wrong sub-genre that is cyberpunk. Take Foreclosed, for instance.

With everything that’s gone on as of late, and all of the big releases and announcements from gamescom, it’s possible that you didn’t hear about Foreclosed. Then again, it’s a smaller game, so that could have been the reason too. It piqued our interest the first time we saw a press release for it, because of its artistic approach to third-person shooting and storytelling. It’s not often you see or get to play games that are designed to be like interactive comic books.

Developed by Antab Studio and published by Merge Games, Foreclosed is the story of Evan Kapnos, who wakes up one morning to find that his life is in ruin. You see, this game takes place within a futuristic and neon-lit universe where people are born in debt, and must work to pay for their identity, not to mention the technological implants that have been placed inside their heads. This creates a world where folks are enslaved to big corporations, who have purchased their debt in return for labour. Needless to say it’s all about modern capitalism and where it could (potentially) go if left unchecked. 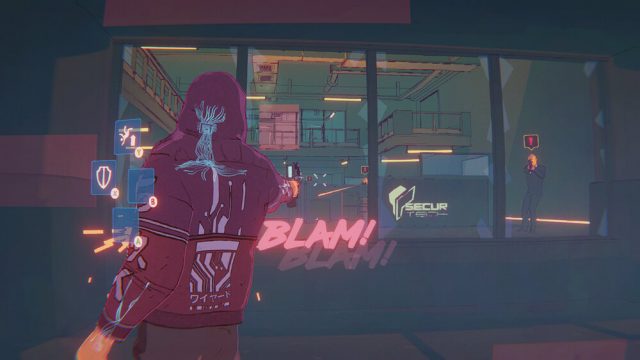 Evan’s employer, who had purchased his debt and basically owned him, has abruptly gone bankrupt. As a result, his identity has been foreclosed, and will soon go up for auction at a court of sorts. Until that time, it’s as if he doesn’t really exist, and killing him wouldn’t bring murder charges down on the guilty party. Furthermore, he can’t go too far, because the city’s automated gates and blockades won’t register his identity or give him access.

Unfortunately, this somewhat interesting premise exists within what is a bad and frustrating video game. One in which the voice acting is poor and the gameplay is worse. If you completely skip this short campaign, you won’t be worse for wear.

Part stealth hacking game and part third-person shooter, Foreclosed feels like a budget PS2 game. Sure, it has the look and presentation of an interactive comic book, but that presentation is the only slightly neat thing about it. The rest simply isn’t enjoyable.

If you’re not pressing a series of directions on the d-pad to hack and unlock doors, or crawling through vents to access empty rooms, you’ll be looking for hidden modems (which grant XP) or shooting lots of bad guys. Instead of organic, interesting and enjoyable gunfights, however, you’ll mostly be locked in rooms that could be referred to as chokepoints. Why? Well, Evan’s pistol is barely up to the task of killing so many baddies, and there’s no adjustable difficulty to be found. As a result, Foreclosed is unfairly difficult, and a lot of that has to do with how random it can be. That, plus how awful its aiming system is.

The general idea is that, as you progress through this three hour-long game you’ll be able to upgrade your pistol and unlock special abilities that are controlled by Evan’s implants (which, as the story tells you, are special). However, what this really boils down to is a poorly designed cover shooter, where enemies can somehow shoot through walls like in that awful Xbox 360 Terminator game. It doesn’t help that you’re often overwhelmed and outnumbered by a pretty large degree, with enemies firing at you from in front, to the sides and from above. This may be similar to some other shooters, but these jerks have perfect aim and never seem to miss unless you’ve found protective cover. Sometimes they’ll even take Evan out in two or three shots. At other times, he’ll be able to withstand more damage. It’s so uneven it’s funny.

This unevenness carries forward into the enemies themselves, which is one of the most frustrating things about this game. I tried to shoot all of them in the head, but never knew whether my shots were landing. There were also far too many times where I’d die because an enemy would be a bullet sponge for no particular reason. Hell, there were occasions where the same type of enemy I’d just killed with a few well placed bullets would take twenty to down. Needless to say, this didn’t add to the fun.

I’ve played lots of shooters in my time, dating back decades, and this is one of the most basic, repetitive and unenjoyable ones I can remember. Evan’s gun should be more capable, but it’s not because even its power-ups sometimes suck. Want exploding bullets? Well, your range will decrease drastically, you’ll have no idea if your bullets are hitting and you’ll hardly notice any sort of explosion. It’s nice that you can equip three power-ups at once, and toggle them off and on, but they don’t make the game fun. Neither do the brain-powered abilities Evan can unlock (like a daze effect or some telekinesis), because when they work they’re far from special or unique. You’ll still die quickly if you don’t hide after popping out to take a couple of shots, and will continually feel weak and bored. 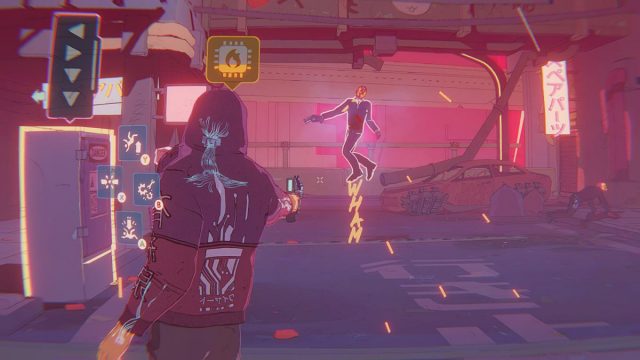 As mentioned above, the voice acting is also poor. One of the main characters — the owner of your former employer, and your guide through this game — often appears over video chat and pushes the story forward as you travel between areas. She’s supposed to be a source of interest, not to mention motivation, but she’s so dull to listen to and so poorly written that she made me want to go to sleep. Then again, so did this game.

The visuals are undoubtedly the best part of Foreclosed, even though they’re only alright, and it’s those that they’ve been highlighting since day one. This game takes place in a neon-hued world, and a futuristic one at that. However, it’s not as flashy as it could’ve been, and does suffer from a lot of boring and repetitive indoor environments, including ugly vents and empty service rooms. It looks better when you’re outside (in this vertical city), but the top-down and behind-the-shoulder vantage points don’t show things off as well as possible. The comic book panel transitions are pretty neat though.

To be honest, Foreclosed was a game that I had trouble putting my finger on from the onset. It always felt like I didn’t know enough about it to make an informed decision as to whether it would be something I should review, purchase or even play. Perhaps it’s because I cover a lot of games and simply didn’t take a lot of time to watch all of its videos. Either way, this is one game that didn’t live up to the hype generated by its PR team. It’s bland, boring and terribly frustrating, and it’s got some of the worst gunplay and checkpoints in recent memory. That’s all too bad, because we don’t often see games that play like interactive comic books.

Foreclosed Review
Foreclosed looks kind of cool, but it's not fun to play. The gameplay is dated, bland and frustrating, and the campaign is quite short. Don't bother with this one.
Visuals60%
Audio42%
Gameplay28%
Storyline48%
The Good Stuff
The Not-So-Good Stuff
2021-09-02
28%Overall Score
Reader Rating: (0 Votes)
0%