I’ve been dreading writing this article. Not because the show wasn’t good or because I’m bored of writing (which I certainly am not), but because I am afraid that I’ll gush. A lot.

Colbie Caillat is one of those artists that has the ability to become classic and timeless. Her mellow, happy songs make people feel good in the best and worst of times, and she has true talent. I attended her concert at Kool Haus last week expecting to hear a decent show and get some decent pictures, but I got much more than I bargained for!

This wasn’t just the expected acoustic set you might think Colbie would put on. The performance of over 15 songs had body and imparted wisdom into the crowd. Not metaphorically, either: “Everyone loves, cries, hurts, everyone gets their heart broken”, she spoke before performing Fearless, the first single from her latest album. And what an incredible message to be delivered by one of the most true to life examples of why being fearless pays off. Colbie started out with a fear of performing in front of audiences, and has become one of the biggest hits to come out of the town called MySpace. She is an artist who truly appreciates everyone who makes her who she is, which makes sense given her humble beginnings. Even though she is so young and it would be easy for her rapid rise to fame to go straight to her head, she has remained grounded and logical, and it is so apparent in everything that she does. Half way through the performance, she invited her guitarist to dance a funny little dance, while a back stage producer came out and sang a short reggae song with her!

Her set had some of the expected mellowness, but even the mildest songs had some unique rocked out portions to them. Realize had a kick ass half minute instrumental solo that got the crowd riled up for the next song: Don’t Cha. Yep, the Pussycat Dolls. It was incredible, melodic, and absolutely perfect. Colbie has some of the most sensual vibes I’ve ever felt and it never feels over used or trashy, but appropriate and fun.

The crowd of course went crazy when Colbie introduced her debut hit with a seductive question: “So, Toronto, I have one question for you: Will you count me in?” The lights went up and she played her acoustic version of Bubbly with the band backing her up. And what a way to finish an incredible show. 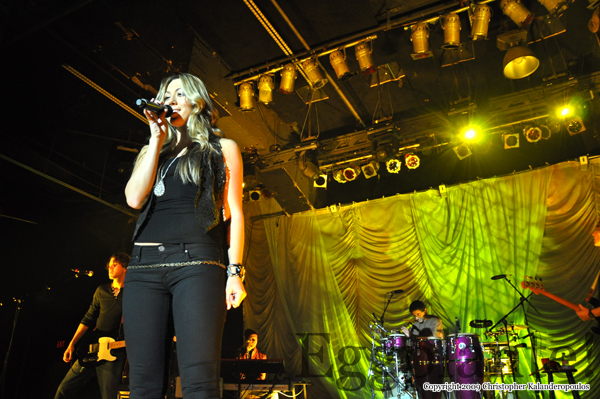