Big news tonight as Destructoid has leaked a photo showing what is reportedly the PlayStation 4 controller in front of a development kit for the console. We want to take you through the fine details of the photo as well as some things you might not have seen or read about on other sites, so let’s get started.

First up, take a look at the photo. Click it to enlarge, or download it to your computer and open it at full size. 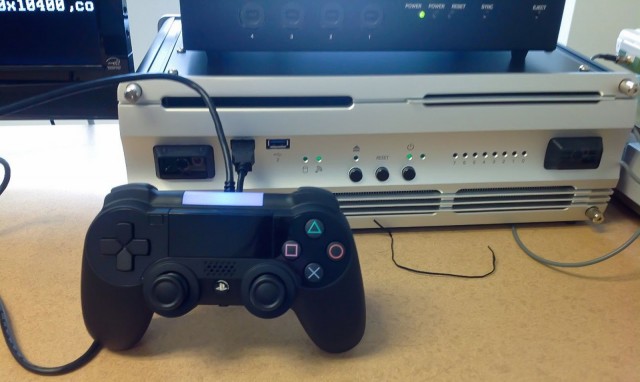 First up is the controller itself, of course. There are a lot of things going on here, so we’ll start with the most obvious: the big shiny black thing in the middle of it. The PlayStation button has been moved down to make way for what appears to be a touchpad. It could be an actual screen that is just off at the moment, but that would go against previous reports of a touchpad as well as contradict the fact that it seems like the controller is on, as evidenced by the glowing blue top.

Next to the touchpad also appears to be a small button. With the touchpad extending around to the top of the controller, this could be a TV control button like we’ve seen on the Wii U GamePad, or it might be the share button Sony has been reportedly toying around with adding to their controller. 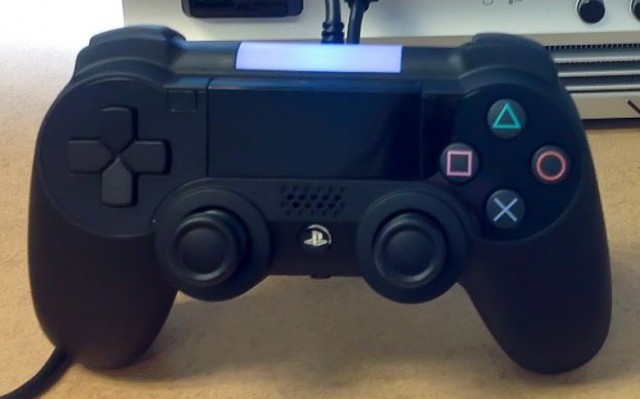 A close-up of all the features on the alleged new controller.

The glowing blue top itself seems to be the same hue as what we might see in a PlayStation Move motion controller, and it wouldn’t be farfetched to say Sony is working its controller and motion technology together into one device. There are a lot of theories here, and our best is that you’ll be able to use the controller as a cursor, selecting items onscreen by moving your controller to point at it. The DualShock 3 SIXAXIS controller already has a gyroscope and accelerometer in it, so it shouldn’t be a huge retrofit to cram a glowing bit inside the controller for the PlayStation Eye to track.

The directional-pad seems to be pushed closer together, but this is also a prototype and we’ve seen bigger and weirder changes to the classic DualShock look before. The face buttons are probably the only thing that remains unchanged about this thing, and we can’t argue with a bit of familiarity.

Reports say that the analog sticks are concave so that you can get a better grip on them, but they appear to be convex to us. There is the addition of a bit of a ridge around their edges, but their convex insides remain closer to the original controller than people originally guessed. They also seem to be spread a bit farther apart, though if you’re used to a PlayStation Vita, you know that it won’t matter as much as long as each analog stick is just as close to each thumb.

Between the PlayStation button and the (alleged) touchpad is a speaker grille, presumably for some audio to be fed from the system closer to your ear canals. We’ve seen that before with the Wii and Wii U remote and GamePad, respectively. There also appears to be an audio jack on the bottom of the controller, much like where you’d find one on an Xbox 360 controller or Nintendo 3DS.

Lastly, the trigger platform up top seems to be curved towards the back and bottom of the controller more than the DualShock is. It isn’t a huge thing, but it does make us wonder if we should plan on holding the controller differently.

For now, the controller is wired, but sources at both IGN and Kotaku have confirmed that this is indeed an early prototype of the PlayStation 4 controller, and it certainly looks far from retail ready to us, so expect things to be different come February 20th.

Are those GameCube ports?

There are a few pieces to this picture that some people have failed to notice from what we’ve seen online. The first is rather odd to us, but it appears as if there’s a black box on top of the dev kit itself that houses four GameCube ports. This could lend some evidence towards the picture being real, but why would a developer still have a GameCube dev kit floating around and in plain view? Also, that thing looks nothing like the GameCube dev kits we could find photos of.

The development unit in the background of the photo plays second fiddle to the controller (and rightfully so) but there are a few things we can glean from it.

First up, the kit is clearly a piece of Sony kit. The row of lights on the right side of the unit matches with a row of lights on the PlayStation 3 development kit that surfaced years ago and turned out to be real. Take a look for yourself. Also, the little icon representing WiFi is one that only Sony uses in their products. A quick image search for “WiFi icon” brings up nothing close to the angular icon Sony uses. 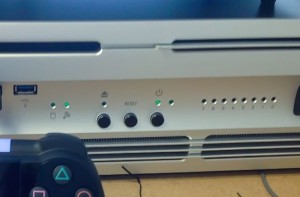 Some pretty familiar icons and lights.

Secondly, the unit is very much locked down. There are massive security bolts all over the thing, not to mention a full metal casing which we can only assume is to protect the inside from prying eyes. We also assume that these units need to be returned to Sony once the final development kits are released, and most companies won’t risk destroying their relationship with the company just to get a peek inside the box.

Sony is set to unveil the next PlayStation at their event next week in New York City. We’ll have a ton of coverage for it before and after, and look for our predictions of what we can expect the day before it all goes down.

Stay tuned to our Twitter and Facebook feeds as well, to make sure you’re caught up on all the latest!