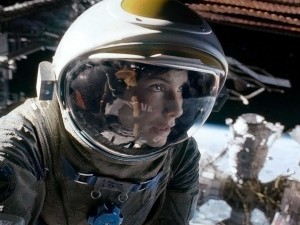 A frequently comforting line in outer space survival thriller, Gravity is, “You can’t beat the view.” That’s very much true, considering how deftly it balances an intense and harsh struggle to survive in a completely inhospitable environment, yet offsets this with awe-inspiring visual design and an almost darkly beautiful soundtrack. It’s amazing how well the movie manages to pack in a sense of excitement simultaneously with a sense of majesty.

It’s small wonder then that Gravity is being widely considered one of the best movies released in the entirety of 2013. I must say that I agree. Sure, contrivance shows up here and there, and those coming for the thrills may simply end up being bored during the handful of more dramatic and emotional scenes. Still, as a visual spectacle, as a heart-wrenching drama, as a gripping thriller and as a highly impressive showcase of Sandra Bullock’s acting talents, Gravity is an immense success that is sure to be one of this year’s top defining movie experiences in the long-term!

It wouldn’t be kind of me to explore plot specifics, as much of the marketing behind Gravity is vague for a reason. I will simply say that the movie is about a storm of debris causing trouble for a seemingly routine space walk. This leaves medical engineer, Ryan Stone (Sandra Bullock) and veteran astronaut, Matt Kowalski (George Clooney) desperately trying to survive while stranded in outer space. The rest is best enjoyed when you don’t know exactly what to expect.

As much as Clooney’s character is an enjoyable presence throughout his time on screen, virtually the entire movie is plunked square on the shoulders of Sandra Bullock’s lead protagonist. It’s through Dr. Stone that the movie explores its themes of triumph over adversity and keeping faith even when all hope seems lost. As Dr. Stone must try and keep her composure by talking to Kowalski, you learn elements of her backstory, and in short order, audiences will start to sympathise with the character and grow attached to her.

This is something that Gravity performs flawlessly. It could have settled for being a straightforward popcorn flick, but the movie aims higher, and more amazingly, succeeds all the more for it. Dr. Stone’s character becomes a character that audiences will become fully invested in seeing survive. It would have been easy to just dismiss the characters as all being dead meat from the get-go. After all, it’s outer space they’re dealing with, and the movie’s opening text reminds you of just some of the reasons why survival in space is impossible.

Even so, the movie becomes transcendent and engrossing on a whole new level thanks to how well it handles Dr. Stone’s character development. Audiences will hope for her survival, even when she’s ready to quit and resign herself to death in space. Her struggle to survive isn’t just unique to the character, it’s something that will suck viewers into the movie completely, motivating them to stay invested and resist the urge to just declare the character dead and gone. The character’s struggle resonates with the audience in a way that I haven’t seen done so well in quite some time. This is just one of many reasons why Gravity exceeds the expectations of its intentionally vague trailers. 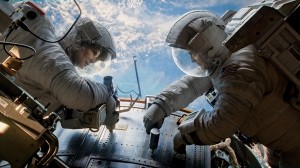 Needless to say, Bullock nails the part too. As much as the movie is a tense and exciting survival thriller quite unlike others in the genre, it’s Bullock’s performance that really makes the whole thing work. Combined with the pitch-perfect direction of Alfonso Cuaron, best known for directing Children of Men and Harry Potter and the Prisoner of Azkaban before this, the character comes alive even with almost no supporting cast to work with. Yes, Clooney shows up and Clooney is plenty fun, providing virtually all of the comic relief for what is otherwise a very harrowing movie, but as I said, this is Bullock’s show through and through.

As you can imagine however, if there’s another star to behold in Gravity, it’s definitely the visual design, which is absolutely outstanding! Almost the entire movie was done using digital set work and CGI, and the sheer amount of painstaking detail that has gone into it is stellar! Even sharing a year with highly visual movies like Pacific Rim, Star Trek into Darkness and Man of Steel, Gravity presents visual design that even manages to outdo those visually stunning blockbusters during its best moments!

Believe me when I say as well that this is not a movie you just want to watch flat either! If you have the option, you absolutely need to spring for a 3D ticket, or better yet, an IMAX 3D ticket! I went all out and saw Gravity in IMAX 3D, and I was very glad I did, because it seems to be how the movie is meant to be viewed. Gravity’s 3D presentation is universally excellent throughout its runtime, perfectly boosting every action sequence with chunks of debris and other such props flying around the audience, while the quieter scenes use the 3D extremely well in turn, effectively capturing the vast, engrossing depths of space. 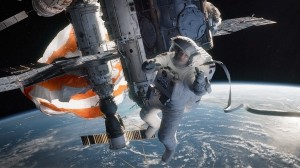 The sections done from a first-person view are especially impressive, as audiences will feel like they’re directly undertaking Dr. Stone’s struggle to survive in space. Blasts of air and fire will appear to engulf the audience, as will the various floating bits that always remind viewers of the movie’s zero-g environment. It’s no exaggeration when I say that this is some of the best 3D work I’ve ever seen to date, and the vast, powerful upgrade afforded to IMAX theatres will only make Gravity all the more visually compelling if you have the means to see the IMAX 3D cut!

At a lean 90 minutes, Gravity makes the most of its runtime by keeping the excitement constantly cranked to eleven, yet not overstaying its welcome. The movie takes place almost entirely in real-time, further increasing the already incredible immersion factor, and on the level of both emotion and excitement, it will leave you wholly satisfied when it concludes. This isn’t because it’s dependent on some opportunistic sequel that can’t realistically happen. This is because the movie just wholly accomplishes everything it sets out to do, and stands effectively alone as an outstanding example of high-quality filmmaking in general.

Gravity deserves all of its immense hype and praise, and thensome! This is an easy contender for the best movie of the Fall season, and is one of the top must-see movies of all 2013! You’ll definitely want to see it on the big screen too, where you can hopefully enjoy the 3D and/or IMAX elements to really experience the movie the way it was meant to be experienced. Director, Cuaron claimed that you’re only getting about 30% of the effect if you just watch the movie flat, and that’s certainly accurate.

Trust me, you don’t want to miss Gravity! 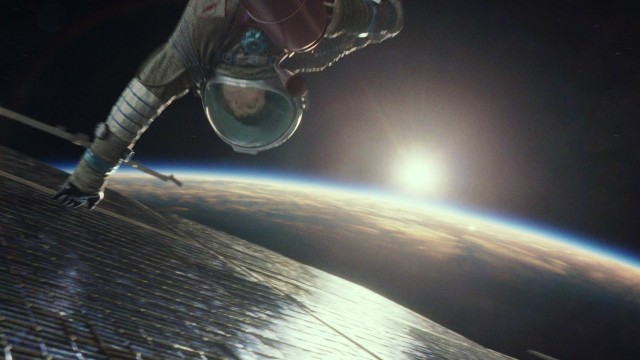