The Big Bang Theory and its regular Thursday comedy bloc has made a return. Kicking off The Big Bang Theory’s 2015 run of episodes is, “The Space Probe Disintegration”, a mostly ok episode that takes some welcome steps forward for our leads.

The main plot of the episode involves Penny and Amy complaining that the guys always pick their activities. Frankly, that’s mostly accurate, given the subject matter of the show. As an attempt to appease their women, Leonard and Sheldon then agree to go shopping with them. This leaves them plenty of time to discuss Sheldon’s continued insecurities about Leonard moving out, even if it is just across the hall.

Over with Raj and Howard, Raj is getting extremely anxious about a space probe turning on to capture some data around Pluto. He has no idea if the probe even survived, leaving Howard and Bernadette to try and keep him happy. Mostly Howard anyway. Bernadette didn’t get too much screentime this week.

This meant that the episode was ultimately pretty simple, and very dialogue-heavy, without much in the way of sight gags, nerd gags or anything else. That’s well and good, as it allows the show to explore where its characters now stand in 2015. The omission of Emily on Raj’s end was a bit bizarre, since you’d think that Raj would call his girlfriend for emotional support before calling Howard, but maybe that’s the joke.

Raj’s anxieties at least provide their own humour for the most part, but the initial buildup is pretty slow and dull. The same is true of Leonard, Sheldon, Amy and Penny, who have plenty of discussion, but not much in the way of strong jokes to start. It’s not until the later points of the episode that we see the payoff to all of this dialogue, which is good, but it does lead to a less interesting first half.

Fortunately, later momentum is better than no momentum, especially when Leonard and Sheldon come to the understanding that Leonard will move out gradually to ease Sheldon into the change, staying at Penny’s a couple of days a week, or one day a week after Sheldon’s negotiations. Even that doesn’t go according to plan, as a funny closing bit involves Sheldon forcing himself onto Penny’s couch so that he’s ultimately not too far from Leonard. It’s amusing, even if it does beg the question of whether Sheldon will eventually have to take on another roommate. Could someone like Stuart be living with Sheldon soon? It would be a great way to give Stuart more consistent higher bearing on the show! Time will tell though.

Naturally, Raj’s anxiety is all for nothing as well, as the probe is fine, and collects the data. This immediately follows a rather amusing blowup by Raj toward an old man that dings his car at the Hindu temple, nicely following Raj’s speech about science vs. religion. This is actually a poignant conversation between Raj and Howard that is executed well, with Raj claiming that he is actually a faithful man, but he just doesn’t show it, since he believes religion is a very personal thing. It’s an interesting new dimension to the character that one probably wouldn’t have considered, even if it is played off with a (funny) gag afterward. 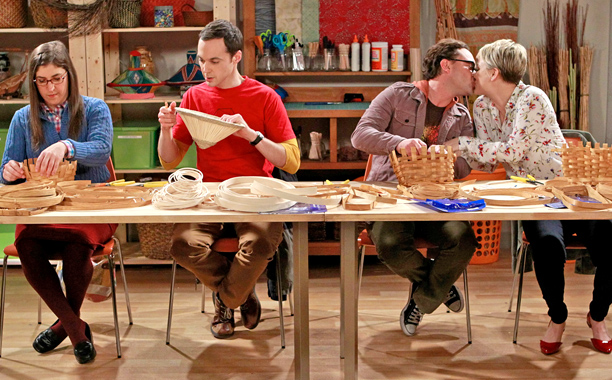 Again, a very simple episode overall, but “The Space Probe Disintegration” was ultimately a satisfying midseason premiere for 2015, even if it took a bit of time to get going. As the show continues to move forward, here’s hoping that 2015 can realize some great character growth for the show’s loveable personalities and their big new life changes!

The Big Bang Theory 8.12: "The Space Probe Disintegration" Review
The Big Bang Theory returns with a mostly decent episode that starts on a dull note, but at least has a strong payoff, particularly in taking a big new step with Sheldon and Leonard.
THE GOOD STUFF
THE NOT-SO-GOOD STUFF
2015-01-09
74%Overall Score
Reader Rating: (1 Vote)
73%