We got out of a match of Halo 5: Guardians new Warzone multiplayer, and it is official: there is a lot going on here, and all of it is good.

It’s great to have a true Halo game back at E3, and while we’re not digging 343 Industries’ naming convention (we’re firmly in the “no subtitle” camp), we’re happy to say Halo is back and it truly is better than ever.

The map we played on was much larger than what we’re used to. This is, after all, a 12-on-12 multiplayer arena, not including the AI characters and additional enemies strewn about the battlefield. That’s what you get with Warzone: in addition to human opponents, there are AI enemies (“bots”) and bosses, much like you’d find in Destiny missions.

The AI opponents can be grunts, elites, hunters, or any of the Prometheans. We haven’t seen the flood, and we’re hoping it stays that way. That parasite ought to be long gone now, anyway.

The variety in enemies also translates to the way players maneuver around the battlefield. In addition to close-quarters combat and gunfights, there are plenty of airborne and land-based vehicles to choose from to mount your assault. The usual Halo multiplayer maps are large enough for them, but these 24-player behemoths are especially well-suited to a mix of aerial and land combat. 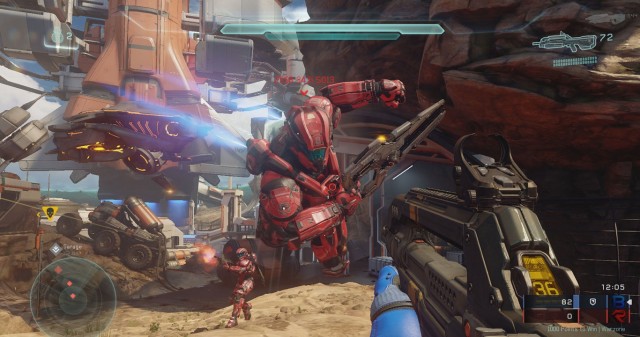 The goal of the game is not exactly simple, but that’s more of a mindset than anything else. Warzone becomes easier to comprehend if you think about it as a mix of three main map types: slayer, firefight, and king of the hill.

New enemies will continue to respawn throughout the match, and while they don’t necessarily come in waves as large as they would in firefight, they do appear with relative frequency. There are also three or four areas that need to be captured in order to properly claim victory in the match. Players must anchor and defend a few areas on the map from the opposing team in order to score points. The first team to 1000 points wins. Oh, and there are guns and stuff. That covers the slayer portion of this.

Our game was a solid 15 minutes, complete with a variety of tactics. The new mechanics like ground pound and clambering were showed off well and made for some interesting movement around the map.

In all, Warzone is a fantastic new mode, full of a new way to play a classic shooter. With Xbox Live and voice chat, this game type will undoubtedly become one of the most popular ones among gamers who want a little strategy mixed in with their shooter.

343 Industries continues to mix up the Halo formula in a way that keeps everything we know fresh by expanding on it to include more new and exciting ways to play. And we imagine this is only the beginning.