One of the virtual reality offerings out there that really intrigues us is Microsoft’s HoloLens platform. Shown off at the company’s media briefing with Minecraft, there is also a Halo HoloLens experience in the works.

Before you get your hopes up, the HoloLens experience built around Halo is quite likely a demo strictly for E3, but it shows that Microsoft is indeed planning on incorporating this experience into more titles than just Minecraft.

The demo we began with had us putting on the device. HoloLens itself is made up of what looks like a large pair of sunglasses with a large plastic ring on the inside of it. This ring is padded on the inside and is what’s used to secure HoloLens to your head. A small screw-like fastener at the back of the device lets you adjust the size, and away you go.

When starting up the demo, the Halo fan in us went nuts. Information began to appear, as if from nowhere, in front of our eyes, and in this case, it was a waypoint right out of the game. We walked down a hallway to a station where we were looking into a hangar door at Pelicans below us readying for flight. Of course, there was no actual door there and anyone who looked at us would have thought we were nuts staring at a blank wall, but inside the HoloLens experience, our eyes were opened to the world of Halo right in front of us.

The next area we walked to was the briefing room. Six of us gathered around a holographic projection table like the one you’d find on the bridge of Halo‘s flagship carrier, the Infinity. Prior to being given a personalized briefing, a schematic of the UNSC Infinity was rotating around. Just looking at certain sections of it would bring up a breakdown of it. For example, we could concentrate our gaze on the thrusters at the rear and be told about its engines. Our curiosity about the hangar, for example, could be quelled just by looking at it. It was wonderful and worked without a hitch.

We were given a briefing of the upcoming Warzone multiplayer map we were about to experience (read our hands on impressions here), complete with building schematics and holographic Spartans speaking right to us.

The entire experience lasted about six minutes and was an absolute thrill ride. It brought us back to the sense of childlike wonder that first time we saw a video game. It showed us the future with holograms and in-world projection. It wasn’t perfect (more on that in a bit), but it was cool as hell.

Augmented reality, as this technology is often referred to as, is typically quite unstable. Holding a camera and trying to monitor what is going on at the same time can create some pretty jittery results. With HoloLens, Microsoft seems to have solved for that. The holograms we experienced appeared to be extremely stable. We even tried to shake our head around to trick the system, but it just didn’t falter. We’re not sure if the experience was augmented with cameras in the ceiling or on the wall, but we were told that HoloLens is a completely wireless solution with absolutely nothing necessary to run except an Xbox or Windows 10.

In a few ways, HoloLens was a bit frustrating. Perhaps it is because we’ve grown accustomed to VR that envelops us and covers the entire face, but the HoloLens actually has a relatively small field of view. That is to say, during the briefing portion of our presentation, there was no way to see the entire table at the same time. And it was only about two feet wide. 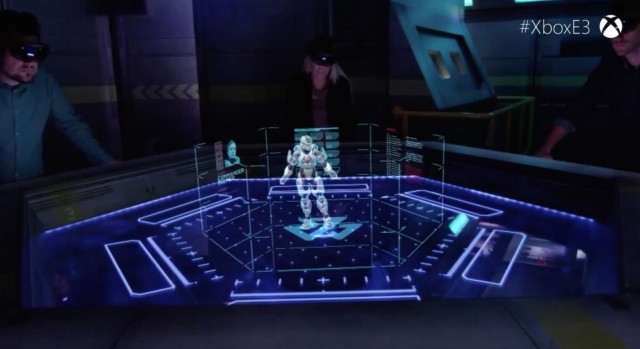 The screen that is projected in front of you is remarkably small, and it’s noticeable. The camera that Microsoft used at their briefing and demo videos to show off the experience must’ve had a HoloLens screen simulation over its entire lens, because there was no way someone could ever get that field of view from the distance it was at.

Regardless, the headset was very comfortable, and the experience was one that notched our excitement up to 11, especially for Halo fanboys like us. Luckily, you can check out a short walkthrough of our experience with a teaser video that the Xbox team put together.

Implications for the future on this are not that you’ll be walking through a Halo-themed room in your house just to play the latest adventures with the Master Chief. But having your hud displayed off screen might give you more real estate for the game itself. Or with the game’s eye-tracking, you could better position your weapon and fire.

We’re very excited about where HoloLens is going to take us, and while there is still lots of work to do to get it just right, this could be the experience we want above all others in the AR and VR space.