Ubisoft games have always been synonymous with quality and reinventing the genre of whatever game they happen to be crafting. The company’s latest title, Ghost Recon Future Soldier, follows in that tradition by completely redefining what a squad-based military shooter is and how it should play.

We’ll be honest: we have never been major fans of the Ghost Recon series. While they have all been widely regarded as great games, they never got us super excited. But something about the way Ubisoft crafted that first Future Soldier trailer grabbed us and has yet to let go, even after completing the game.

Ubisoft Red Storm, Paris, and Bucharest all had a hand in making Future Soldier, and they all deserve amazing credit for it. If you couldn’t tell already, we love this game.

The title cinematic opens up in true Hollywood style. It feels like a movie even if the graphics aren’t perfectly photorealistic. The cuts in the sequence, the bright army green hues over the desert, and the music blaring over the radio reminded us of Iron Man’s opening sequence at its core. It’s truly beautiful stuff to open up the game, even if it is a little too perfect, hinting that a bomb just might go off.

(Surprise. A bomb goes off.)

All hell breaks loose, a chunk of hot ember explodes onto a soldier’s arm, and his exposed flesh visibly peel away. It’s brutal in the same way Tomb Raider was at last year’s E3. Brutal.

We haven’t felt the intensity from a game like this in a while. It’s more gripping than Modern Warfare 3 and somehow more realistic than Battlefield 3, even if the tools and weapons you brandish aren’t exactly current tech.

From a graphical standpoint, the game is phenomenal in its environmental diversity, but not so stunning in its textures. There was no texture pop-in, but getting close up to walls and other surfaces doesn’t really make you feel like you’re there. Luckily, you never really do that in the heat of the game, but we always check to see how much fidelity is actually there. The real story here though is the locales. You go to places like Nigeria, Pakistan, and of course, the Middle East. Of course, we’ve seen the rough areas of these war zones before in other games like every entry in the Call of Duty franchise, but they’ve never looked nicer than they do right here, in the thick of battle and all.

Unfortunately, the lip-synching of characters doesn’t match up with the rest of the beautifully designed visuals. Faces are pretty well animated, if not a bit too glossy and waxy, but it doesn’t seem like there was much time spent on matching dialog to the characters’ mouth movement. It’s not a deal breaker by any stretch, but it is a bit annoying, especially when the rest of the game seems so carefully considered by the developers.

In regards to the audio in Ghost Recon, you can expect nothing but the best in this department as well. When you load in the game for the first time, you’ll be prompted to install some content to your hard drive for a better audio experience, or so it says. We don’t want to know what it would sound like without the audio patch, because so far, we’re used to near perfect audio capture. Some voices sound a bit off, but they sound like more of a problem of the acting rather than the audio engineering itself.

From a gameplay perspective, Future Soldier delivers a lot of fun, wrapped up in a super technological package, and the recycled throughout the game. Okay, so there’s some good and bad stuff there. See, the game is fun. When we’re not playing it, we want to be playing it. But when we’re playing it, we’re wondering why the game is exactly the same from mission to mission. There is some good variety within missions, but the sequence tends to follow a pattern: enter an area, clear it, wait for your evac helicopter to get delayed or shot at, go to the next area, repeat. Sure, there are fun things to do in the meantime, but otherwise, the game follows a pretty predictable pattern. 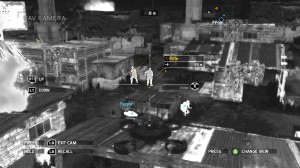 Aiming at your enemies is pretty easy, and it doesn’t usually take more than a bullet or two to take someone down, so realism is at its peak here as well. With that said, you’re just as vulnerable, which is why the healing mechanic comes into play quite often. Your computer-based comrades will be helping you out more often than you’ll be helping them if you’re anything like us – run and gun as opposed to slow and low – but thankfully, the mechanics of healing don’t feel tacked on to the game. It is certainly a realistic component to have, and it is very easy to feel anxious when you’re lying there waiting to be rescued, as you’re nothing more than a sitting duck on the battlefield.

The cover system is also something that seems extremely well thought out and designed from the ground up for the game. We’d actually go out on a limb and say that the cover system in Future Soldier is the best in any game, ever. You rarely, if ever, don’t have something to cover you, and it’s a total cinch to snap in and out of cover. Running between cover points, you have an intense sense of speed, as if you’re actually dashing to save your life between cover. There is a sense of urgency we don’t see in many games, even ones that call themselves realistic.

There are a few escort missions here and there and while they usually turn us right off to a game, these ones seemed somehow more realistic and worth exploring. There are actually two within the first three missions of the game which was a bit annoying for the sake of variety, but the missions themselves were very well done and only a small component of each actually involved any kind of civilian coddling.

An interesting mechanic introduced early on in the game is actually the way the menu system functions. Rather than the traditional pre-loading screen setup, you’re seemingly in the middle of a series of cutscenes when you navigate your load out, mission information, and drop zone and extraction points. You’re actually using a tablet like an iPad to view all this information, and it’s another layer of that oft-mentioned realism Ubisoft managed to add to make you feel like you know the world these soldiers actually live in.

But it’s not all gravy. Some game mechanics are not exactly the most unique. Marking kills for your squad mates to eliminate if ripped straight from Splinter Cell: Conviction and while that’s not a bad thing and Ubisoft does develop a lot of games and their development teams borrow ideas, it would be nice to see something different created and implemented. Luckily, the mechanic has been updated to be a bit more transparent, and your squad mates will only take a shot when they are lined up and ready for it, as opposed to Conviction’s shooting through walls fiasco of 2010. Ubisoft Paris and Bucharest also managed to nab the projected text system from Conviction, and while it isn’t for highlighting objectives, it is still there. Rather than being projected onto buildings, however, this text somehow floats in mid air, usually telling you of your location, which is pointless, really. It does still look cool, though.

The troubling thing about the mechanic, called Sync Shot in Future Soldier, is that it doesn’t make sense that Sam Fisher, a lone gunman can mark and execute two, three, and four opposing forces, while each Ghost can only assassinate one. It is a little inconsistency that bugs us, especially considering the two games are supposedly taking place in the same universe.

Ghost Recon games have traditionally been rather slow and poorly paced. Ubisoft has changed enough of the formula to renew the franchise’s lease on life while somehow keeping the feel of a Ghost Recon game.

In general, squad-based shooters tend to rely heavily on very specific commands anytime you need to do anything. Even Ubisoft was a culprit of this with the Rainbow Six series, where your commands were either enter-and-clear, breach-and-clear, or stealth-breach. Instead, in Future Soldier, everything is a lot more fluid. You walk up to a door and press a button, and the game takes over, puts you through a window or over a window ledge into the heat of the action, until giving you the controls right back and letting you fire the fatal, enemy-neutralizing shot. Your team always does exactly what they should do, and the artificial intelligence is good enough to know what it means to do the right thing.

By the end of most games, we’re sick and tired of watching loading screens go by. We’re happy to say that the load times in Future Soldier weren’t horrible, although they could be slightly improved. If they stole the Mark and Execute feature from Conviction, couldn’t they have done away with loading times by hiding everything behind a series of cinematics?

The one thing we won’t really touch upon here is the storyline. It is very easy to give away game-spoiling details, as there are a couple of good plot twists here. Unfortunately, the characters are not all that memorable, so the twists are not very human in nature, but rather war-changing surprises. None of your squad mates turns on you, because let’s face it, even if they did, you wouldn’t know which one it was or care all that much. You’d just shoot him.

Ghost Recon: Future Soldier is as realistic a game as you’ll find, even considering it is set in the future with some pretty unbelievable tech. It’s not our favourite Tom Clancy game, if only because we love Splinter Cell and Rainbow Six as much as we do. Future Soldier is certainly the best entry in the Ghost Recon series, and without a doubt one of the best games we’ve played so far this year.