Anyone who says they don’t have an excuse to buy a Nintendo console this holiday season is a bold faced liar.

This year, understanding the need for consumers to get a great deal (and the greater need for Nintendo to actually sell some consoles), the company has released an incredible nine different bundles spanning four consoles.

The Wii U bundles should be the most obvious here. There are three varieties to choose from: Mario, Zelda, and Skylanders. While we’re fans of the custom paint job on the Zelda-themed Wind Waker HD bundle (check out our unboxing here), you can also indulge yourself into New Super Mario Bros. U and New Super Luigi U with a single bundle, or a pretty sweet Skylanders Swap Force bundle which also nets you a white basic console.

All three bundles are about $300, depending on where you pick them up, though its worth noting that the Skylanders bundle, due to its addition of the toys, only includes the now-outdated basic set Wii U with a paltry 8GB of onboard storage.

The Legend of Zelda: The Wind Waker HD Wii U Deluxe Set

On the portable front, there are technically five offerings. The first is the most recent announcement of the Mario & Luigi: Dream Team 3DS XL Bundle with a custom paint job on the console. There’s also a deep blue standard-size 3DS that pairs well with Luigi’s Mansion: Dark Moon (which is included in the box, of course) if you’ve got smaller hands or want a slightly more portable experience.

Of course, the one we’d choose is the Legend of Zelda: A Link Between Worlds 3DS XL bundle, because, well, it’s just so gorgeous. And if you’re getting two consoles this holiday season, it just makes sense to pick up both Zelda varieties.

The Dream Team bundle goes for $200, the Zelda variety adds an extra $20 to that, and the Luigi’s Mansion variant is just $170.

The Legend of Zelda: A Link Between Worlds Nintendo 3DS XL Bundle 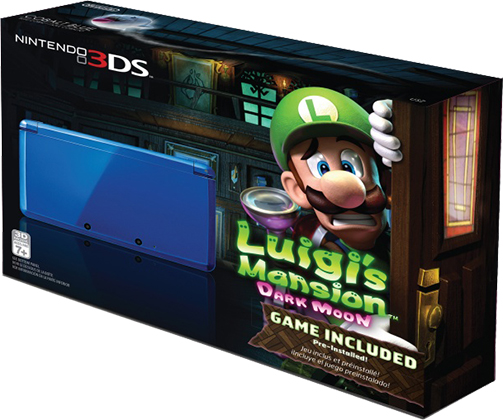 When Nintendo originally announced the Nintendo 2DS, the only thing that didn’t surprise us about the announcement was its availability day-and-date with Pokémon X and Pokémon Y on October 12th. To make sure people understand the connection, Nintendo is releasing a pair of bundles with the game included.

Yes, Nintendo still makes this bad boy. Probably the only console we loathe more than the Virtual Boy, the Wii mini is still something that Nintendo sees fit to trump around like it’ll sell anything. A Canadian exclusive last year, the console hit the UK in 2013 and comes to the US this holiday at a price of $99 including a copy of Mario Kart Wii.